But here’s a sobering thought – at various early points in the history of our nation, certain people decided very consciously that they absolutely should not. And many of our modern institutions – from the police to the courts to the schools – were built on this cracked foundation.

The historical decisions that have shaped our moment are often invisible to us – like water to fish, we swim in the choices our ancestors have made.

But we when we realize that this is the case – that our reality is not set, but a sum total of historical choices – we become responsible for our own actions.

And then, we are truly free.

Here are a selection of free history lessons from our archives – suitable for middle or high school classrooms – that shed a light on our current moment. If you aren’t teaching lessons like these in your social studies classes, ask yourself – why not?

Do you have other relevant lessons?  Share them – I would be honored to host them for free so that they can reach a wider audience!  Reach out to me here.

The American System was an economic plan that played an important role in American policy during the first half of the 19th century. Rooted in the “American School” ideas of Alexander Hamilton, the plan “consisted of three mutually reinforcing parts: a tariff to protect and promote American industry; a national bank to foster commerce; and federal subsidies for roads, canals, and other ‘internal improvements’ to develop profitable markets for agriculture.” Congressman Henry Clay was the plan’s foremost proponent and the first to refer to it as the “American System.”

Use this map to plan infrastructure improvements to 19th Century United States.  Link different regions to improve economic connections between different regions – remember, you have to sell your plan to Congress, so you need to make it profitable to as many states as possible in order to secure their votes.

Choose one of the following events from the Revolutionary War.  Pretend you have been hired to adapt this historical event into a big budget Hollywood blockbuster.  Script a key scene for this film, including scenic directions and dialogue.

Remember that in film, images tell much of the story, serving to evoke the emotions and thoughts of the viewer.  Integrate dialogue into the action of the scene. Rather than have characters deliver speeches, for example, let them talk while they are moving or doing something that will add visual interest to the scene.  Your scene can be dramatic, humorous, even musical, feel free to subvert gender roles – but it should be based firmly on the facts with plenty of references to identifiable historical individuals and situations.  It should also give your audience a sense – through dialogue, symbolism, or narration – of the significance of the event they are witnessing.  Why was is this scene important – to the story of the war and/or to future generations?

Check here for an explanation of how a screenplay is written.

Battles of Lexington and Concord

The Battles of Lexington and Concord were the first military engagements of the American Revolutionary War.  About 700 British Army regulars in Boston, under Lieutenant Colonel Francis Smith, were given secret orders to capture and destroy Colonial military supplies reportedly stored by the Massachusetts militia at Concord. Through effective intelligence gathering, Patriot leaders had received word weeks before the expedition that their supplies might be at risk and had moved most of them to other locations. On the night before the battle, warning of the British expedition had been rapidly sent from Boston to militias in the area by several riders, including Paul Revere and Samuel Prescott, with information about British plans. The first shots were fired just as the sun was rising at Lexington.  The British pushed on to Concord. The Americans had taken away most of the munitions, but they destroyed whatever was left. In the meantime, American forces in the countryside had mobilized to harass the British on their long return to Boston. All along the road, behind stone walls, hillocks, and houses, militiamen from “every Middlesex village and farm” made targets of the bright red coats of the British soldiers. By the time Gage’s weary detachment stumbled into Boston, it had suffered more than 250 killed and wounded. The Americans lost 93 men.

Characters to include: John Parker

Adoption of the Declaration of Independence

The Declaration of Independence, adopted July 4, 1776, not only announced the birth of a new nation, but also set forth a philosophy of human freedom that would become a dynamic force throughout the entire world. The Declaration drew upon French and English Enlightenment political philosophy, but one influence in particular stands out: John Locke’s Second Treatise on Government. Locke took conceptions of the traditional rights of Englishmen and universalized them into the natural rights of all humankind. The Declaration’s familiar opening passage echoes Locke’s social-contract theory of government:

We hold these truths to be self‑evident, that all men are created equal, that they are endowed by their Creator with certain unalienable Rights, that among these are Life, Liberty and the pursuit of Happiness.

Valley Forge in Pennsylvania was the site of the military camp of the American Continental Army over the winter of 1777–1778 during the American Revolutionary War. It is approximately 20 miles northwest of Philadelphia.  Starvation, disease, malnutrition, and exposure killed nearly 2,500 American soldiers by the end of February 1778.

With winter almost setting in, and with the prospects for campaigning greatly diminishing, General George Washington sought quarters for his men. Washington and his troops had fought what was to be the last major engagement of 1777 at the Battle of White Marsh (or Edge Hill) in early December. He devised to pull his troops from their present encampment in the White Marsh area (now Fort Washington State Park) and move to a more secure location for the coming winter.  Though no battle was fought here from December 19, 1777 to June 19, 1778, a struggle against the elements and low morale was overcome on this sacred ground.

“Naked and starving as they are we cannot enough admire the incomparable patience and fidelity of the soldiery.” –General George Washington at Valley Forge, February 16, 1778.

The Service of Deborah Sampson

Deborah Sampson wore men’s clothes and joined an Army unit in Massachusetts under the name “Robert Shirtliff” (also spelled in some sources as “Shirtliffe” or “Shurtleff”). She joined the Light Infantry Company of the 4th Massachusetts Regiment, under the command of Captain George Webb (1740–1825). This unit, consisting of 50 to 60 men, was first quartered in Bellingham, Massachusetts, and later mustered at Worcester with the rest of the regiment commanded by Colonel William Shepard. Light Infantry Companies were elite troops, specially picked because they were taller and stronger than average. Their job was to provide rapid flank coverage for advancing regiments, as well as rearguard and forward reconnaissance duties for units on the move. Because she joined an elite unit, Sampson’s disguise was more likely to succeed, since no one was likely to look for a woman among soldiers who were specially chosen for their above average size and superior physical ability.

Sampson fought in several skirmishes. During her first battle, on July 3, 1782, outside Tarrytown, New York, she took two musket balls in her thigh and a cut on her forehead. She begged her fellow soldiers to let her die and not take her to a doctor, but a soldier put her on his horse and took her to a hospital. The doctors treated her head wound, but she left the hospital before they could attend to her leg. Fearful that her identity would be discovered, she removed one of the balls herself with a penknife and sewing needle, but the other one was too deep for her to reach. Her leg never fully healed.

Characters to Include: Deborah Sampson

A series of battles left British General Cornwallis’s armies in retreat toward Yorktown, Virginia, where they expected to be rescued by a British fleet. The fleet showed up, but so did a larger French fleet, so the British fleet retreated out to sea after a brief battle, leaving Cornwallis trapped between the American and French armies on land and the French fleet at sea. Finally, on October 19, 1781, General Cornwallis surrendered his army of 8,000 British soldiers.

Characters to Include: Washington, Lafayette, Cornwallis 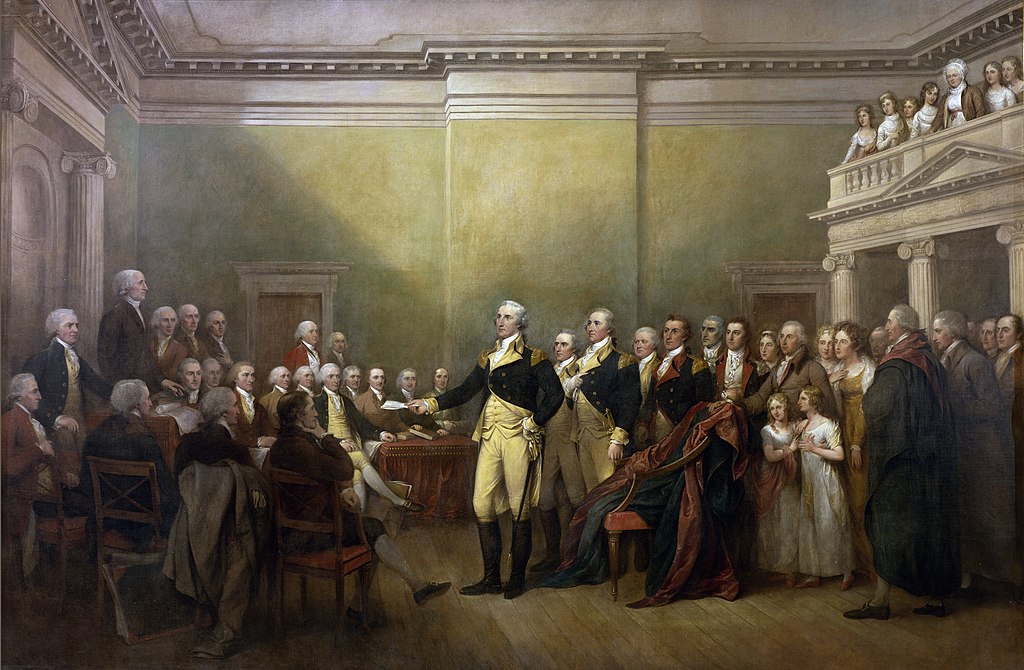 By the Treaty of Paris signed on September 3, 1783, Great Britain recognized the independence of the United States. Washington disbanded his army and gave an eloquent farewell address to his soldiers on November 2. On November 25, the British evacuated New York City, and Washington and the governor took possession. At Fraunces Tavern on December 4, Washington formally bade his officers farewell and he resigned his commission as commander-in-chief on December 23, 1783, to the Continental Congress in the Old Senate Chamber of the Maryland State House in Annapolis, Md. “I consider it an indispensable duty to close this last solemn act of my official life, by commending the interests of our dearest country to the protection of Almighty God, and those who have the superintendence of them, to his holy keeping.” Historian Gordon Wood concludes that the greatest act in his life was his resignation as commander of the armies.  King George III called Washington “the greatest character of the age” because of this.

Washington later submitted a formal account of the expenses that he had personally advanced the army over the eight-year conflict of about $450,000. It is said to have been detailed regarding small items and vague concerning large ones, and included the expenses incurred from Martha’s visits to his headquarters, as well as his compensation for service—none of which had been drawn during the war.

Characters to Include: Washington

What happened to the ancient Maya?  How did their great cities come to ruin?  Check out this new Openendedsocialstudies documentary short, shot on location in Ek’ Balam, a Maya ruin in Mexico’s Yucatan Peninsula.  This tour of the city is a great primer on the latest theories of Maya collapse and can be enjoyed by the casual viewer, or in the classroom, in conjunction with our brand new unit on the ancient Maya.

Check out this new Openendedsocialstudies documentary short, shot on location at Uxmal, a Maya ruin in Mexico’s Yucatan Peninsula.  This tour of the city is a great introduction to Maya culture and can be enjoyed by the casual viewer, the history buff, or in the classroom, in conjunction with our brand new (and totally free) unit on the ancient Maya.