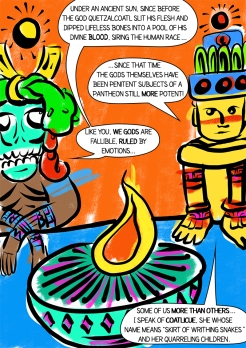 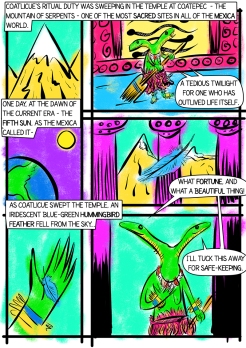 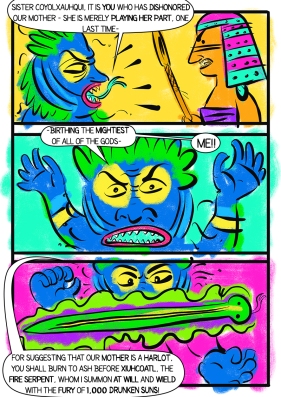 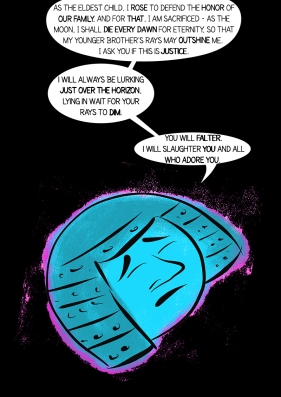 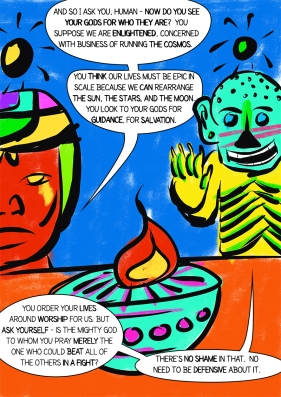 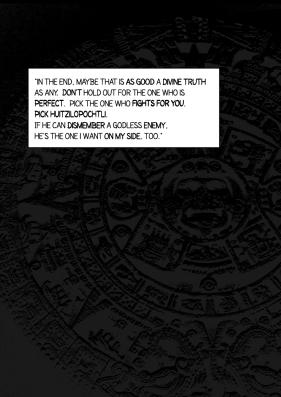 The Birth of Huitzilopochtli and the Mexica World

The Mexica – more commonly known in the English-speaking world as the Aztec – are today remembered as fierce warriors, conquerors of a great Mesoamerican empire still in ascendancy when the Spanish arrived to upset the balance of power in Central America.  The Mexica themselves were upstarts in the chaotic and ever-shifting world of central Mexico some five hundred years ago. Until the early 1400s, they were an unremarkable and put-upon faction among the Nahua, the larger linguistic and cultural group to which the Mexica belonged.

Through a stunning reversal (to be covered in future issues) the Mexica came to dominate the Nahua world.  Though they had once toiled in the mud to pay their mightier neighbors humble tribute, within the space of a single generation – and under the direction of a great warrior and politician named Tlacaelel – the Mexica now commanded a tributary empire of their own, the likes of which ancient Mexico had never seen.  In this newly constituted Mexica empire, people were taught to remember their place in the strict social hierarchy, which extended from the lowliest laborers all the way up to the emperor Tlacaelel and beyond.

This was a time and place in which a people’s particular gods were thought to demand a cut of any good fortune, from a harvest to the spoils of war – for services rendered, as benefactors to the lowly tribes of mortal men who depended on such gods for their very survival.  Like all of the Nahua people, the Mexica believed that the current world – existence as we know it, which they referred to as the Fifth Sun – would end in violence and destruction, just as the gods’ previous four doomed attempts at creation had ended.

It was the new emperor Tlacaelel who credited the god Huitzilopochtli, long their patron, with the meteoric rise of the Mexica people.  In a sweeping reformation of the traditional Nahua religion befitting the stunning realignment of power in the Nahua world, Tlacaelel elevated Huitzilopochtli to the same level as other ancient gods such as Quetzalcoatl and Tlaloc.

Huitzilopochtli became of the Mexica god of war, sun, human sacrifice, and the patron of their grand capital city Tenochtitlan.  Every day, relentlessly and without mercy, Huitzilopochtli – in his role as the life-giving sun and champion of the Mexica people – vanquished the abyssal night that threatened to consume the world.  The daily sunrise was viewed as another victory in the celestial war against darkness, the moon (Coyolxauhqui), and the stars (centzon huitznahua).

But his success was no foregone conclusion.  Under Tlacaelel, the Mexica came to believe that it was their duty and obligation to give strength to Huitzilopochtli and thereby postpone the end of the Fifth Sun.  This favorable outcome could only be ensured through the sacrificial offering of human blood.

This blood came in two main ways.  First, on a daily basis priests and the Mexica emperor himself would prick themselves ritually with tiny cactus needles, driven into their own ears, tongues, and chests.  Second, and most spectacularly, on sacred festival days during the year, humans were sacrificed on the Templo Mayor in the ritual center of Tenochtitlan, their beating hearts extracted from their living bodies by expert priests using sharp obsidian knives, before their heads were decapitated in a ritual patterned on Huitzilopochtli’s murder of his sister, Coyolxauhqui.

For the Mexica, war and the empire they gained through conquest was an important source not just of material wealth, but of human tribute to be offered up in this way to Huitzilopochtli.  For this reason, the capture of prisoners of war was typically prized over the killing of enemies in battle. Similarly, in addition to the material wealth paid annually to the Mexica by conquered peoples – quetzal feathers, gold, chocolate, coffee, seashells, and other valuable commodities – the Mexica typically required a set number of human offerings to be sent to Tenochtitlan from subject nations.

The pyramid-shaped Templo Mayor at the center of Tenochtitlan was a symbolic representation of the mountain of Coatepec, where, according to Mexica myth, Huitzilopochtli was born.  Here, Huitzilopochtli had emerged from his mother Coatlicue fully grown and fully armed to battle his sister Coyolxauhqui and her brothers the Centzon Huitznahua who intended to kill him and their mother. Huitzilopochtli was victorious, slaying and dismembering his sister. Her body was then thrown to the bottom of the hill.

Just as Huitzilopochtli triumphed at the top of the mountain while his sister was dismembered and fell to pieces below, so Huitzilopochtli’s temple and icon sat triumphantly at the top of the Templo Mayor while a carving of the dismembered goddess lay far below at the pyramid’s base.  Nearby, a large skull rack held the decapitated heads of hundreds of sacrificial victims, recalling the way Coyolxuaqui’s head had been cast into the sky and remained on display as the moon.

When the Mexica sacrificed people to Huitzilopochtli, the victim would be placed on a sacrificial stone at the summit of the Templo Mayor. The priest would then cut through the abdomen with an obsidian or flint blade rivaling a modern surgical knife in sharpness. The heart would be torn out – still beating – and held towards the sky in honor to Huitzilopochtli.  The body would be carried away, down the steep steps of the temple, and either cremated or given to the warrior responsible for the capture of the victim.  This warrior might then cut the body in pieces and send them to important people as an offering, or use the pieces for ritual cannibalism. The warrior would thus ascend one step in the hierarchy of the Mexica social classes, a system that most keenly rewarded successful warriors.

Who knows?  If that warrior were successful enough in battle – bringing back to Tenochtitlan enough captives for sacrifice at the Templo Mayor – he might be inducted into such knightly orders as the Jaguars or the Eagles.  He would then know true honor and prestige.

For he had played a part in saving the world; keeping it spinning upon its axis; in ensuring that the sun would rise another day.  It is tempting to call the Mexica brutal, and maybe it is true that in the name of Huitzilopochtli they relished war and reveled in the shedding of blood… Would it have been nobler to let the Fifth Sun – the very world as we know it – come to some cataclysmic end?

Knowing that you could have prevented the end of life on Earth – and failing to act, whether from weakness, or squeamishness, or dereliction of duty – that would have been the true definition of brutality.

Most great civilizations have an organizing myth – a story they tell themselves to explain their way of life.  For example, in the modern United States, Americans tell themselves that their country exists as a selfless champion of democracy – as maybe the best thing that has ever happened to the world, even if the cost preserving that democracy is violence and war.  For the Mexica, if their civilization did not conquer and sacrifice in the name of the sun god Huitzilopochtli, the world itself would come shuddering to an end.

Thus, the story of Huitzilopochtli became one of the driving beliefs of Mexica civilization.  This powerful imperative gave rise to one of the great Native American civilizations, the mighty Mexica Empire, who used it to rationalize their dramatic rise and dominance over their neighbors in Central Mexico.

But that’s a story for next issue…

Looking for an engaging way to teach mythology in your classroom?  Go beyond Greece and Rome, and introduce your students the folklore of ancient Mexico with Comix Azteca Volume One:

Old Mother Coatlicue gives birth to Huitzilopochtli, the iridescent god of war and sun – scandalizing her adult children and setting off a war that will change the world forever.

Adapted from the tradition Nahuatl folk tale and retold for modern audiences with glorious pop art from cartoonist Phil Skaggs and a script by historian and Openendedsocialstudies.org founder Thomas Kenning. This edition contains a supplemental essay and selected artwork from the original Mexica sources.

Electronic copies now on sale for the teacher-friendly price of just $1.99.  Physical copies available (in black and white) at discounted rates.  Inquire here.

Check out this preview: 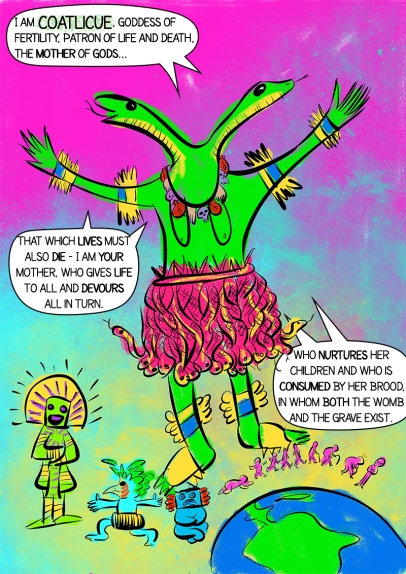