It is risky for a nation’s economy to be overly dependent on any one business, especially a single raw commodity, like oil.  Such commodities are subject to sudden fluctuations in price.  While world demand for oil is high, and while a nation’s reserves last, that nation might be very wealthy.  But what would happen to that economy if oil prices fell?  If demand for oil fell as a result of new, greener energy technologies in the 21st century?  If oil supplies ran out, as all finite supplies do?

The answer of course, is that that nation’s economy would be developed.  Nations like Saudi Arabia and Venezuela – prosperous by world standards, as a result of large oil reserves – have recently suffered very dramatic economic contractions a result of falling oil prices.  According to The Independent, shopkeepers in Venezuela have begun weighing cash rather than counting it – a sign of catastrophic hyperinflation as the nation’s economy spirals out of control.  The paper writes,

“Oil makes up a staggering 95 per cent of Venezuela’s exports, and accounts for a quarter of the country’s economy, with oil-related revenues having historically supplied roughly half the government budget. This kind of over-reliance on a single export notoriously depresses all other industries in a country.”

The United Arab Emirates – per capita, one of the wealthiest nations on Earth – is seeking to avoid this fate.  More than 60% of the UAE’s GDP comes from oil and natural gas.  Abu Dhabi and Dubai are the two richest emirates.  They are also reinvesting a large portion of this wealth into other sectors in an effort to diversify their economies by the year 2030.

As last as the 1960s, the Emirates were largely undeveloped desert, peopled by mostly nomadic peoples. There was little fresh water and no electricity, let alone roads or other infrastructure. 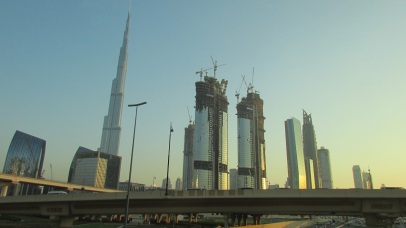 The Burj Khalifa in Dubai (left) is emblematic of the modern United Arab Emirates – fantastic and futuristic, diverse and ultra-modern, all fueled by the deliberate reinvestment of petroleum profit. 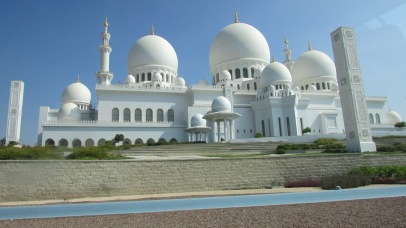 The Sheikh Zayed Grand Mosque in Abu Dhabi is one of the world’s largest mosques. The nation’s prosperity is on display even in its expressions of its Muslim faith – the mosque features the world’s 3rd largest chandelier, made of Swarovski crystals, and the whole thing cost half a billion dollars. 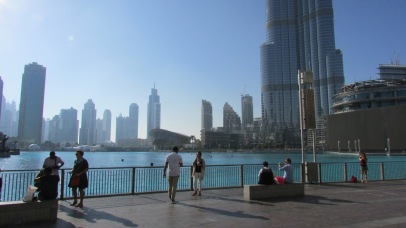 In an effort to diversify its economy, the Emirates are working to become, among other things, a major tourist destination. Tourism accounted for 16% of the GDP in 2010. 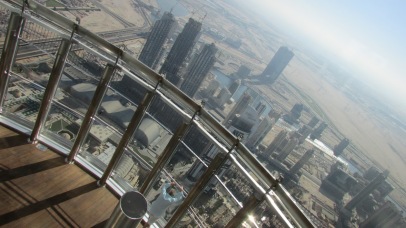 The view from the 125th story of the Burj Khalifa looks like something out of a science fiction movie set in the not-too-distant future. Real estate is another booming sector of the Emirati economy.

As Gulf News summarizes, “The UAE is on the threshold of a new phase of growth that does not only rely on the volume of oil revenues as was the case for the better part of four decades. Rather, it depends on growth of non-oil sectors after implementation of a policy of economic diversification, which has led to an impressive development in key sectors over recent years, such as in tourism and air transport, trade and financial services, as well as manufacturing and alternative energy.”

THIS LESSON WAS MADE POSSIBLE THROUGH A GENEROUS GRANT FROM THE BILATERAL US-ARAB CHAMBER OF COMMERCE.

Sweat in the streets of Manama and Doha, ride to the top of the Burj Khalifa in Dubai, witness the grandeur of Islamic architecture at the Sheikh Zayed Mosque before spending the evening dune bashing with high paying tourists in the sands of Abu Dhabi.