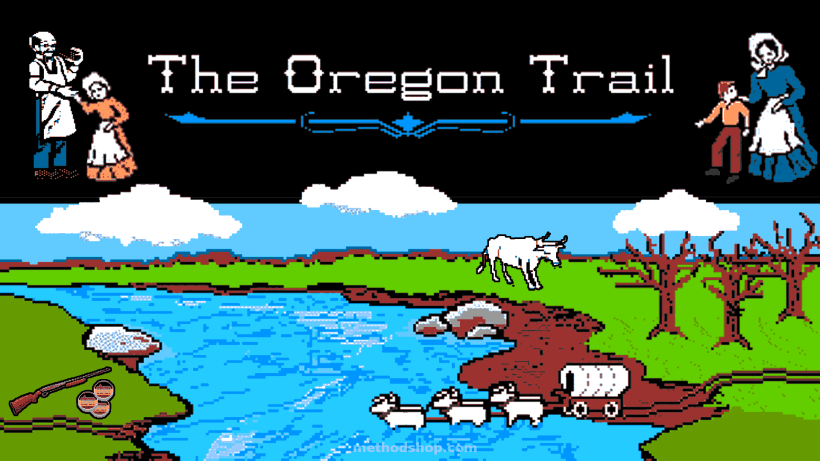 The Oregon Trail was a 2,170-mile, historic East–West, large-wheeled wagon route and emigrant trail in the United States that connected the Missouri River to valleys in Oregon.From the early to mid-1830s (and particularly through the years 1846–69) the Oregon Trail and its many offshoots were used by about 400,000 settlers, farmers, miners, ranchers, and business owners and their families.

The Oregon Trail is a computer game developed by the Minnesota Educational Computing Consortium and first released in 1985. It was designed to teach students about the realities of 19th-century pioneer life on the Oregon Trail.  In the game, the player assumes the role of a wagon leader guiding a party of settlers from Independence, Missouri, to Oregon‘s Willamette Valley via a covered wagon in 1848.

Play several rounds of the game, embedded below.  While you play, devise a research question about the real life Oregon Trail. For example, what was the leading cause of death for pioneers traveling west?  Are there many grave markers left along the old route of the trail, and if so, what do they say? What was hunting like in the 1800s, and what impact did it have on animals like American Bison?  What were covered wagons really like, and did settlers actually carry spare parts for them?

Create an infographic with facts, figures, images, and at least three paragraphs worth of information on the realities of some aspect of the game.  Be sure to include information about your sources at the bottom of your infographic.  You can see an example of a student infographic here and here.