This lesson is a companion to Potosi and the Globalization of an Empire.  It can also be used independently. This text is adapted in part from open sources.

Schoolchildren learn that Columbus sailed under the flag of Spain, and that his venture was funded on the audacious notion that a lucrative trade route with the far east might be established with an easy trip west.  Columbus grossly misjudged the diameter of the Earth, it turns out, though his mistake became one of the most consequential in all of world history, bringing the Eastern and Western Hemispheres into direct contact for the first time, opening the Americas for European conquest and colonization, and inaugurating a period of social, economic, and environmental exchange through which we are still living in the early the early 21st century.

But the Spanish wanted more.  They never gave up on that tantalizing promise of a western trade route with Asia, especially after the initial plunder of the Aztec and the Inca in the early 1500s.

The Spanish continued to extract raw materials from indigenous labor their American colonies, most notably silver from the great mine at Potosi, in modern Bolivia.  Silver mines were opened here in 1545 and soon accounted for fully half of the silver produced in the world on an annual basis.  On its own, the silver mined at Potosi was of little use to Spanish.  The rich don’t love money, but what it can buy for them.  In this case, much of the silver mined at Potosi made its way to Ming China – via the Manila Galleon.

In 1521, just after the conquest of the Aztec in Mexico, and just before the conquest of the Inca in Peru, a Spanish expedition led by Ferdinand Magellan sailed west across the Pacific using the westward trade winds. The expedition arrived in the Philippines, finding there a diverse assortment of tribal groups, Muslim sultanates, and most enticing to the Spanish, a small community of Chinese merchants.  Magellan promptly claimed the archipelago for Spain.

Although he died there after involving himself in a local conflict, one of Magellan’s ships made it back to Spain by continuing westward around the tip of Africa.  In the decades that followed, other Spanish sailors figured out how to sail east – rising eastward winds at the 38th parallel north,  off the coast of Japan – back over the Pacific toward Mexico, a journey that under the best of conditions took four months, but sometimes as long as six.  This is an incredibly long time to go without taking on fresh water or food.

The goods arrived in Acapulco and were transported by land across Mexico to the port of Veracruz on the Gulf of Mexico, where they were loaded onto the Spanish treasure fleet bound for Spain. From the early days of exploration, the Spanish knew that the American continent was much narrower across the Panamanian isthmus than across Mexico. They tried to establish a regular land crossing there, but the thick jungle and malaria made it impractical.

This route was a vital alternative to the even riskier trip west across the Indian Ocean, and around the Cape of Good Hope, which was reserved to Portugal according to the Treaty of Tordesillas and fraught with European privateers who might commandeer the Spaniard’s valuable cargo.

As it was, the city of Manila, representing wealth and a formidable European foothold in Asia, became a regional hub of trade and a target for foreign powers.  At various times, has Manila come under attack by the Chinese, the Dutch, the English, the Americans, and the Japanese.  In 1574, a fleet of Chinese pirates led by Limahong attacked the city and destroyed it before the Spaniards drove them away.  The colony was rebuilt by the survivors. These attacks prompted the construction of a walled, stone city – today known as Intramuros – to anchor and secure the eastern end of Spain’s trade route.

The first Manila Galleon made the round trip between Acapulco and Manila in 1565, with galleons making the same circuit nearly every year until Mexican Independence in the early 1800s.  This trade route, whose main hub was Manila, marked a new chapter in globalization, linking the labor and products of Asia, the Americas, and Europe.  While this is a remarkable achievement, it is important to remember that it came about through tremendous hardship, brutality, and exploitation at almost every turn.

Potosi silver – mined, refined, and transported by native slaves under horrendous conditions – was taken by llama and mule train to the Pacific coast.  From there, the silver was transported by ship up the coast to the port of Acapulco (in present-day Mexico), and from there on to Manila in the Philippines.  This silver was in high demand by the Chinese, who based their monetary system on this precious metal.

Wary of outsiders, the Chinese spurned European attempts to establish trading posts in their home territory.  As a result, the Asian end of the galleon trade was supplied by merchants largely from port areas of Fujian in southern China, who traveled with the blessing of the Chinese Emperor to Manila to sell the Spaniards spices, porcelain, ivory, lacquerware, processed silk cloth, and other valuable commodities.  These are the same products – so valuable in Europe – that in ancient times fueled the Silk Road; the same ones that nearly a century earlier tempted Columbus and other men hungry for profit.

As a result, every available corner of the galleon was dedicated to carrying its profitable cargo – reports even suggest that cisterns meant to carry fresh water were sometimes given over to commercial product – and hygiene was poor.  Historian Jan DeVries found that some 2 million men made trading voyages to Asia between 1580 and 1795, but only 920,412 survived: an overall survival rate of just 46%. On the Manila Galleon route, a large number of these men were Filipino, who worked under these harsh conditions for pay that you and I would find appalling – but which represented to them a tremendous windfall, the likes of which were otherwise hard to come by under the poverty of Spanish rule.

“In Manila, life was leisurely, even beautiful,” writes David Z. Morris, describing the height of the galleon trade as experienced by the Spanish elite. “The work of administering the galleons took up only two or three months of a year, with the rest of the colonists’ time given purely to lavish parties, carriage rides, and social intrigue. The Spanish were singularly indolent occupiers, developing no aspect of the local economy except the galleon trade.”

By contrast, little of this wealth made its way into the hands of Filipinos.  The Spanish cultivated a deliberate policy of exclusion toward their colonized subjects – prohibiting their education in the Spanish language as means to hold Filipinos from professional jobs and more cosmopolitan views of the world, encouraging Filipino submission through the careful application and withholding of Catholic teachings, and establishing large Spanish-owned estates in the countryside, reducing the Filipino to little more than an unskilled laborer and a tenant in his own homeland, even as its resources were enriched the Spanish conquerors.

From time to time during more than 300 years of Spanish rule, Filipinos openly rebelled against this injustice.  Manila proved to be too lucrative a prize, however, and the Spanish would not let it go so easily, even after Spain’s American colonies achieved independence in the early 1800s.  During these centuries, tens of thousands of Filipinos went abroad – settling at the other end of the galleon route, in Acapulco, in Mexico City, in California, seeking greater opportunity outside of the repressive structures that the Spanish had erected to maintain their domination over Manila.

Formerly known as San Antonio, the San Diego was a trading ship built in Cebu by Filipino workers under the supervision of European boat-builders. It was docked at the port of Cavite to undergo reconditioning and repair, but at the end of October 1600, under threat of an impending Dutch attack on Manila, it was hastily converted into a warship and renamed.

On December 14, 1600, the fully laden San Diego was engaged by the Dutch warship Mauritius under the command of Admiral Olivier van Noort a short distance away from Fortune Island, Nasugbu, Philippines. Since San Diego couldn’t handle the extra weight of her cannons, which led to a permanent list and put the cannon portholes below sea level, she was sunk without firing a single shot in response. The Dutch were later reported firing upon and hurling lances at the survivors attempting to climb aboard the Mauritius.

Nearly 400 years later, in 1992, the wreck was discovered by an underwater archaeologist.  A total of 34,407 artifacts were recovered from the shipwreck, including more than five hundred blue-and-white Chinese ceramics in the form of plates, dishes, bottles, kendis, and boxes which may be ascribed to the Wan Li Period of the Ming Dynasty; more than seven hundred and fifty Chinese, Thai, Burmese, and Spanish or Mexican stoneware jars; over seventy Philippine-made earthenware potteries influenced by European stylistic forms and types; parts of Japanese samurai swords; fourteen bronze cannons of different types and sizes; parts of European muskets; stone and lead cannonballs; metal navigational instruments and implements; silver coins from the mint at Potosi; two iron anchors; animal bones and teeth (pig and chicken); and seed and shell remains (prunes, chestnuts, and coconut), all of which shed invaluable light on the physical reality of a Manila Galleon.

Recovered from the San Diego was this part of a larger, mass produced set of Chinese porcelain with a deer motif – each hand painted, varying organically, but following the same design. (Manila, Philippines, 2018.)

Another fine example of Chinese porcelain recovered from the San Diego. (Manila, Philippines, 2018.) 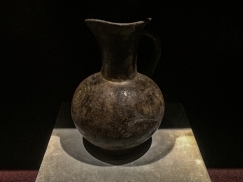 This Mexican made vessel is decorated with Mediterranean influenced designs. It was aboard the San Diego when it sunk. (Manila, Philippines, 2018.)

Also aboard the San Diego were these silver coins were mined and minted in Potosi, in modern day Bolivia. (Manila, Philippines, 2018.)

History of the Philippines: From Indios Bravos to Filipinos by Luis Francia.

THIS LESSON WAS INDEPENDENTLY FINANCED BY OPENENDEDSOCIALSTUDIES.ORG.

If you value the free resources we offer, please consider making a modest contribution to keep this site going and growing.