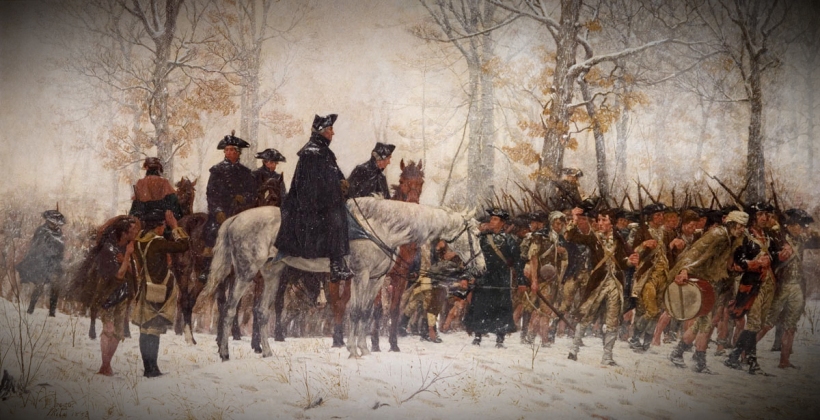 A chapter of The United States: An Open Ended History, a free online textbook.  Adapted in part from open sources.

Although the Americans suffered severe setbacks for months after independence was declared, their tenacity and perseverance eventually paid off. During August 1776, in the Battle of Long Island in New York, Washington’s position became untenable, and he executed a masterly retreat in small boats from Brooklyn to the Manhattan shore. British General William Howe twice hesitated and allowed the Americans to escape. By November, however, Howe had captured Fort Washington on Manhattan Island. New York City would remain under British control until the end of the war.

That December, Washington’s forces were near collapse, as supplies and promised aid failed to materialize. Howe again missed his chance to crush the Americans by deciding to wait until spring to resume fighting. On the night of December 25–26, 1776, Washington crossed the Delaware River, north of Trenton, New Jersey. In the early-morning hours of December 26, his troops surprised the British garrison there, taking more than 900 prisoners.

In September 1777, however, Howe defeated the American army at Brandywine in Pennsylvania and occupied Philadelphia, forcing the Continental Congress to flee. Washington had to endure the bitterly cold winter of 1777‑1778 at Valley Forge, Pennsylvania, lacking adequate food, clothing, and supplies. Local farmers and merchants exchanged their goods for British gold and silver rather than for dubious paper money issued by the Continental Congress and the states.

With disease and hunger rampant, Valley Forge was the lowest ebb for Washington’s Continental Army.  While the winter itself was not particularly harsh, many soldiers remained unfit for duty, owing to the lack of proper clothing and uniforms.  Years later, General Marquis de Lafayette, an early French ally to the American cause, who was present at Valley Forge, recalled that “the unfortunate soldiers were in want of everything; they had neither coats, hats, shirts, nor shoes; their feet and legs froze till they had become almost black, and it was often necessary to amputate them.”

While formal politics and warfare did not include women, ordinary domestic behaviors became charged with political significance as women confronted the Revolution. Women in the era of the Revolution were responsible for managing the household.  Halting previously everyday activities, such as drinking British tea or ordering clothes from Britain, demonstrated Colonial opposition during the years leading up to and during the war.

Patriot women continued a long tradition of weaving, and spun their own cloth to make clothing for their families. In addition to the boycotts of British textiles, the Homespun Movement served the Continental Army by producing needed clothing and blankets.

Some women were economically unable to maintain their households in their husband’s absence or wished to be by their side. Known as camp followers, these women followed the Continental Army, serving the soldiers and officers as washerwomen, cooks, nurses, seamstresses, supply scavengers, and occasionally as soldiers and spies. The women that followed the army were at times referred to as “necessary nuisances” and “baggage” by commanding officers, but at other times were widely praised. These women helped the army camps run smoothly. Prostitutes were also present, but they were a worrisome presence to military leaders particularly because of the possible spread of venereal diseases.

Wives of some of the superior officers (Martha Washington, for example) visited the camps frequently. Unlike poorer women present in the army camps, the value of these well-to-do women to the army was symbolic or spiritual, rather than practical. Their presence was a declaration that everyone made sacrifices for the war cause.

In France, enthusiasm for the American cause was high: The French intellectual world was itself stirring against feudalism and privilege. However, the Crown lent its support to the colonies for geopolitical rather than ideological reasons: The French government had been eager for reprisal against Britain ever since France’s defeat in 1763. To further the American cause, Benjamin Franklin was sent to Paris in 1776. His wit, guile, and intellect soon made their presence felt in the French capital, and played a major role in winning French assistance.

France began providing aid to the colonies in May 1776, when it sent 14 ships with war supplies to America. In fact, most of the gunpowder used by the American armies came from France. After Britain’s defeat at Saratoga, France saw an opportunity to seriously weaken its ancient enemy and restore the balance of power that had been upset by the French and Indian War. On February 6, 1778, the colonies and France signed a Treaty of Amity and Commerce, in which France recognized the United States and offered trade concessions. They also signed a Treaty of Alliance, which stipulated that if France entered the war, neither country would lay down its arms until the colonies won their independence, that neither would conclude peace with Britain without the consent of the other, and that each guaranteed the other’s possessions in America. This was the only bilateral defense treaty signed by the United States or its predecessors until 1949.

The Franco-American alliance soon broadened the conflict. In June 1778 British ships fired on French vessels, and the two countries went to war. In 1779 Spain, hoping to reacquire territories taken by Britain in the Seven Years’ War, entered the conflict on the side of France, but not as an ally of the Americans. In 1780 Britain declared war on the Dutch, who had continued to trade with the Americans. The combination of these European powers, with France in the lead, was a far greater threat to Britain than the American colonies standing alone.

In July 1780 France’s King Louis XVI had sent to America an expeditionary force of 6,000 men under the Comte Jean de Rochambeau. In addition, the French fleet harassed British shipping and blocked reinforcement and resupply of British forces in Virginia. French and American armies and navies, totaling 18,000 men, parried with British General Cornwallis all through the summer and into the fall.

A series of battles left Cornwallis’s armies in retreat toward Yorktown, Virginia, where they expected to be rescued by a British fleet. The fleet showed up, but so did a larger French fleet, so the British fleet retreated out to sea after a brief battle, leaving Cornwallis trapped between the American and French armies on land and the French fleet at sea. Finally, on October 19, 1781, General Cornwallis surrendered his army of 8,000 British soldiers.

The British had asked for the traditional honors of war, which would allow the army to march out with flags flying, bayonets fixed, and the band playing an American or French tune as a tribute to the victors. However, Washington firmly refused to grant the British the honors that they had denied the defeated American army the year before at the Siege of Charleston. Consequently, the British and Hessian troops marched with flags furled and muskets shouldered.

Cornwallis refused to attend the surrender ceremony, citing illness. Instead, Brigadier General Charles O’Hara led the British army onto the field. O’Hara first attempted to surrender to Rochambeau, who shook his head and pointed to Washington. O’Hara then offered his sword to Washington, who also refused and motioned to Benjamin Lincoln, his own second-in-command. The surrender finally took place when Washington’s second-in-command accepted the sword of Cornwallis’ deputy.

For the next year, scattered fighting continued, but back in Britain, the British were crushed by this defeat. Before long, Parliament voted to cease all offensive operations in “the colonies.”

Although Cornwallis’s defeat did not immediately end the war, a new British government decided to pursue peace negotiations in Paris in early 1782, with the American side represented by Benjamin Franklin, John Adams, and John Jay. Signed on September 3, 1783 the Treaty of Paris acknowledged the independence, freedom, and sovereignty of the 13 former colonies, now states. The new United States stretched west to the Mississippi River, north to Canada, and south to Florida, which was returned to Spain.

At the conclusion of the war in 1783 large numbers of loyalists and their families relocated to the home country of England and or to the still-British colony of Canada.

The article was adapted in part from: