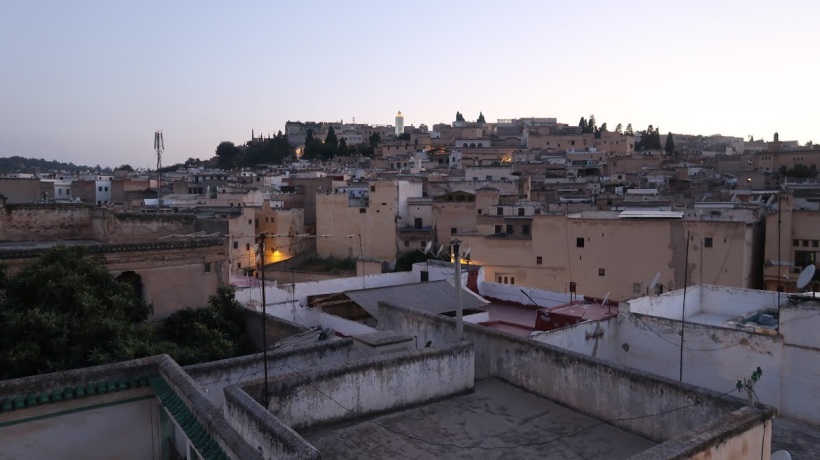 Fes is the ancient capital of the first unified Moroccan state, founded in 803 CE when Idris I, the great-great-great grandson of Muhammad the Prophet, subdued local Berber tribes.

Idris I was a refugee of sorts – a member of the ruling class of the largest Arab empire based in Baghdad. A successful rebellion led to the death of his brothers, and he fled west, across the harsh Sahara to the land known as the Maghreb – today`s Morocco. There, he settled near the ruins of Roman Volubilis, where he was welcomed by the local Berber tribe – many of whom had converted to Islam after the religion was carried alongside gold, spices, and ivory in the trans-Saharan trade. 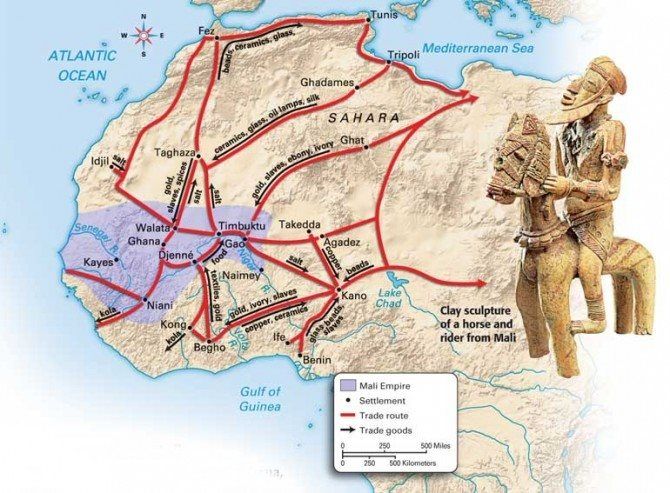 Moroccans, like many Muslims, look for a leader who has a quality they call barakah – blessed by God. This quality can be demonstrated in many ways – the leader brings prosperity to the country, he leads the army to great victories, a drought ends on his watch. It must have seemed miraculous to these Berbers, living at an unremarkable juncture on the Saharan trade routes that a descendant of the Prophet had come to live among them, and before long he was their leader, further demonstrating his barakah by conquering many neighboring Berber tribes and founding the Idrisid Dynasty, the first great Moroccan-based empire, with Fes as its capital.

As these thing go, this success ruined his hiding spot. The Arab rebels – known as the Abbasids – who had killed his family and sent him into hiding, eventually had Idris I assassinated, too. 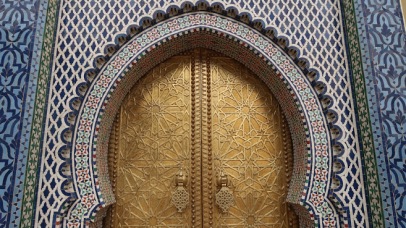 Fez’s Palais Royale may be a modern palace, but it hints at the fantastic wealth of Idris I’s ancient capital. These large brass doors stand nearly a dozen feet tall. They are surrounded by sumptuous zellige (colorful geometric mosaic tilework) and carved cedar wood. 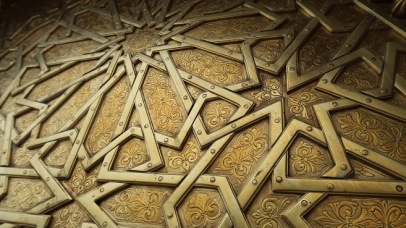 His son, Idris II attained even greater success in unifying the Maghreb. Fes was an important part of this success, as it occupies a pass in the Rif Mountains – guarding a main trade route between the Sahara and the Mediterranean Coast. Placing his capital at Fes meant that Idris could wield economic as well as military power over his people at their neighbors. He could tax goods as they moved through Fes’s many markets and funduqs. He could use this revenue to fund massive unlicensed works – fountains to provide beauty and freshwater to the city’s residents, for example, or communal ovens and local schools. Fes’s residents were merchants and innkeepers who prospered on his watch. In short, the quality of life for the average Berber under Idris I and II was pretty good. This is the epitome of barakah – which flows from God to those that are closest to God, such as saints and prophets. Those that have received barakah are thought to have the abilities to perform miracles (karamat) – in the case of a king, this could mean bringing peace and prosperity, good harvests, and good health to his people.

While it is not exactly the same thing, barakah could loosely be compared to what Enlightenment thinkers in Europe might have called “the social contract.” If the people of a kingdom are happy and safe, they will accept the rule of their emir. Idris could exercise all of this “soft power” before ever ordering a single act of violence or repression by his great army – and why would he ever need to do anything by force when life for his subjects was so good? 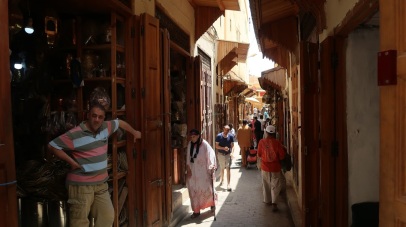 Under Idris, the souks – or markets – of Fes were flooded with trade goods from across the African and Mediterranean worlds. 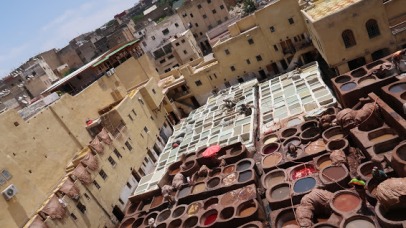 For its part, Fes became a major producer of leather goods. Tanneries such as this one still produce fine leather using many of the same techniques they have for more than a thousand years. 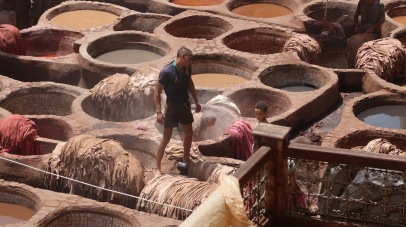 A man and his son drop animal hides – goats, cows, or camels, usually – into vats of chemicals, which dye and preserve the skins as leather. 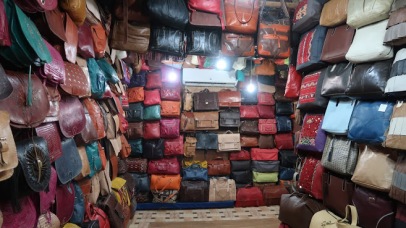 The end result of this process is a colorful array of bags, clothing, and other leather goods. 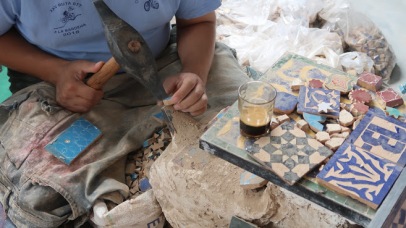 The fine artisans of Morocco produce intricate tilework by hand, a trade that has persisted for more than a thousand years. Then, as now, their detailed work is expensive – a sign of status whether it adorns a palace wall or the floors of a riad, or wealthy person’s home. 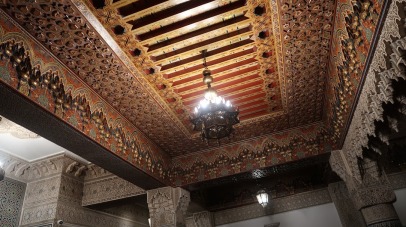 This riad likely belonged to a wealthy merchant in some distant past. This cedar wood likely came to Fes along the trade routes that passed through the city, and it was hand carved and painted by local artisans – a sign of great status on the part of the man who once owned this home.

Fes became the center of culture and learning in the Maghreb. While most Europeans of the time were living in what a previous generation of historians called “The Dark Ages,” in Fes, the world’s oldest functioning university – University of al-Qarawiyyin – began operation in 859 CE.

As it has for over 1100 years, education at Al Quaraouiyine University concentrates on the Islamic religious and legal sciences with a heavy emphasis on, and particular strengths in, Classical Arabic grammar/linguistics and Islamic law, although a few lessons on other non-Islamic subjects such as French, English are also offered to students. Teaching is delivered in the traditional method, in which students are seated in a semi-circle (halqa) around a sheikh, who prompts them to read sections of a particular text, asks them questions on particular points of grammar, law, or interpretation, and explains difficult points. Students from all over Morocco and Islamic West Africa attend the Qarawiyyin, although a few might come from as far afield as Muslim Central Asia. Even Spanish Muslim converts frequently attend the institution, largely attracted by the fact that the sheikhs of the Qarawiyyin, and Islamic scholarship in Morocco in general, are heirs to the rich religious and scholarly heritage of Muslim al-Andalus.

Most students at the Qarawiyyin range from between the ages of 13 and 30, and study towards high school-level diplomas and university-level bachelor’s degrees, although Muslims with a sufficiently high level of Arabic are also able to attend lecture circles on an informal basis, given the traditional category of “visitors in search of knowledge.”

After the reign of Idris II, the dynasty began to fracture. Royal brother fought royal brother for control of the empire. They would eventually be conquered by a new dynasty arising in the south of Morocco, but the owing to its status as a center of trade and learning, the glory of Fes would not really fade.

Fes remains perhaps the greatest symbol of Morocco, a country at the crossroads of Africa, Europe, and the Mediterranean, reflected in the cosmopolitan flavor of a city founded by an Arab ruler leading a pan-Berber empire, accepting immigrants from as far afield as modern Spain, and protecting the diversity of Jews and Christians who have long called the city home.