The Three Sisters is a traditional name for the three main agricultural crops of various Native American groups in North America. They are winter squash, maize (corn), and climbing beans. 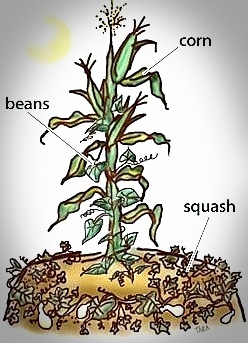 In a technique known as companion planting, the three crops are planted close together. Flat-topped mounds of soil are built for each cluster of crops.  Each mound is about 12 inches high and 20 inches wide.  Several maize seeds are planted close together in the center of each mound.  When the maize is 6 inches tall, beans and squash are planted around the maize, alternating between the two kinds of seeds. The development of this agricultural knowledge took place over a period of 5,000–6,500 years. Squash was domesticated first, around 8,000-10,000 years ago, with maize second (at first consumed primarily in the form of popcorn), and then beans.

The three crops benefit from each other. The rigid stalk of the maize plant provides a structure for the vines of the bean plant to climb, eliminating the need for poles or lattices which are more commonly used today. At the same time, the bean plant naturally restores nitrogen to the soil – a nutrient necessary to the healthy development of maize and squash plants. Meanwhile, the creeping squash plant spreads along the ground. Its broad leaves weave together, blocking the sunlight at the lowest levels of the garden, preventing the establishment of weeds. The squash leaves also act as a “living mulch,” retaining moisture in the soil. If that wasn’t enough, the the prickly hairs of the squash vine deter pests.

Not only do these the Three Sisters grow symbiotically, they provide an almost complete nutritional package for anyone consuming their produce.  Maize, beans, and squash contain complex carbohydrates, essential fatty acids, and eight essential amino acids. This allowed Native Americans to thrive on a mostly plant-based diet.  Author Charles C. Mann explains, “Maize lacks the amino acids lysine and tryptophan, which the body needs to make proteins and niacin;…. Beans have both lysine and tryptophan…. Squashes, for their part, provide an array of vitamins; avocados, fats.”

Here are some lessons about societies that have thrived based on the system of Three Sisters companion planting:

1491: New Revelations of the Americas Before Columbus by Charles C. Mann.

THIS LESSON WAS INDEPENDENTLY FINANCED BY OPENENDEDSOCIALSTUDIES.ORG.

If you value the free resources we offer, please consider making a modest contribution to keep this site going and growing.

A Guided Tour of Maya Mexico, 2017 – Explore the ruins of Ek’ Balam, Uxmal, and Chichen Itza, scramble through streets of colonial Merida, and sample the cuisine and culture of Mexico’s Yucatan Peninsula.  Supplementary photos and information on the Yucatan, past and present.

One thought on “The Three Sisters”