Cuba is one of the most challenging places I have ever traveled.  Little about the way this place is transparent.  People are very thorough, checking every box, but not necessarily in order.

Case in point, the group taxi to Vinales this morning.  The company picked up a girl named Ariana when they were supposed to pick up a girl named Ana.  They verified her identity, but only after they had picked everyone else up.  After Ariana had been riding around in the car for forty minutes.  And after Ana disappeared, probably passed and with no ride.  We fellow passengers rode back and forth across Havana two more times for another forty minutes while the company sorted this mistake out.  We were finally on the road to Vinales an hour or so late.  This was fine with me and par for the course – I plan extra time for travel in countries like this just for this reason.

But I’m glad it was Ana, not Thomas who got lost in the shuffle.

Vinales is a beautiful valley, where the local villagers have struck it big with guesthouses and small restaurants, catering the foreigners like me who want, inexplicably, to trapse through their backyards, taking in the lush scenery.  The surrounding valley is full of mogotes – large limestone remnants of an ancient plateau that look like a fitting setting for Jurassic Park.

It’s ostensibly a national park, but my hike this afternoon is characterized by a low level panic as I double back and search frantically for the trail.  I managed to get a map of the park from the local Infotur office.  But it doesn’t seem to be to scale, and it is an approximation of informal farmers’ tracks rather than a real park map.  My guidebook is no help either.  It splinters and peters out unpredictably in farmers’ fields, and no one here seems to have heard of a trail marker.  The trails start and end behind peoples’ homes, and I come uncomfortably close to a woman using the “bathroom” in her backyard.

But that’s not the scariest part!  That comes when I’m literally charged by a horse that feels I’ve invaded it’s personal space. It’s tied up and all – but the trail passes within its radius.  I finally cross slowly, widely into the surrounding pasture, but only after exhausting several other forks in the trail that dead ended instead of detoured. 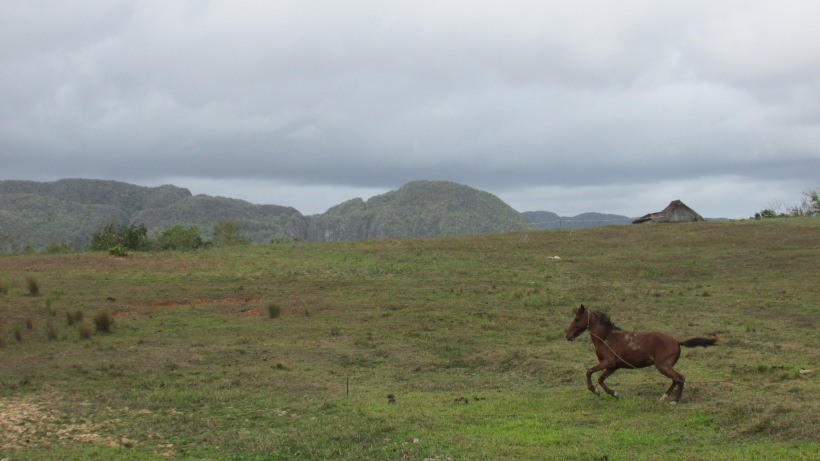 Here, what’s on the menu depends on the time of day and the day of the week, how many people ordered before you tried, and what’s in season.  Mixed vegetables might mean a single slice of squash.

In the US, the grocery store is always in stock, no matter what you want, and you can order a burger twenty-four seven.  Life is messier here in small ways, while our tidy US American life obscures the unpredictably of the real world.  We are sheltered and spoiled, lulled into a false sense of security about our place in the world.

The old man who runs my hostel doesn’t speak English, and he doesn’t know what day it is.  He has a watch that tells the date – it’s on his wrist but it stopped four days ago, and this is news.  Life in the countryside, he laughs.

Cuba is best when you can take it as it comes, but here, you lull yourself into complacency at your own peril.

After all, there’s an angry horse tied up on the road ahead.

And that’s half the fun. 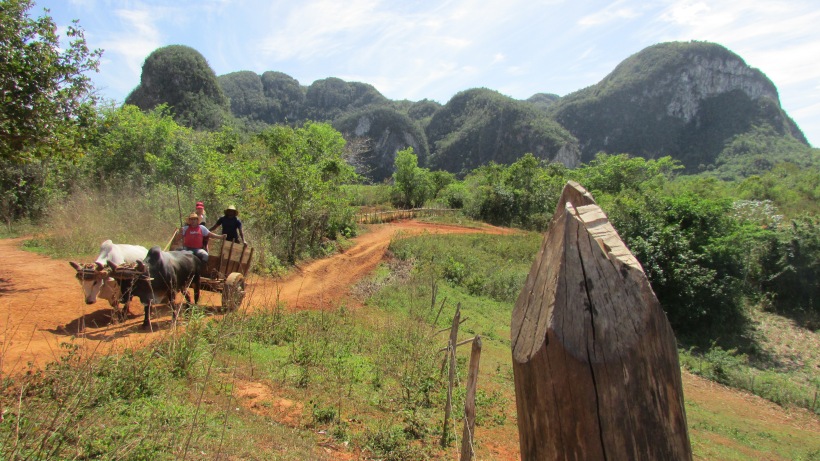