How and why do governments regulate the flow of people and information? Is the government’s interest always the same as the people’s?

The history of the Great Wall of China began when fortifications built by various states during the Spring and Autumn (771–476 BC) and Warring States periods (475–221 BC) were connected by the first emperor of China, Qin Shi Huang, to protect his newly founded Qin dynasty (221–206 BC) against incursions by nomads from Inner Asia. The walls were built of rammed earth, constructed using forced labor, and by 212 BC ran from Gansu to the coast of southern Manchuria.

Later dynasties adopted different policies towards northern frontier defense. The Han (202 BC – 220 AD), the Northern Qi (550–574), the Sui (589–618), and particularly the Ming (1369–1644) were among those that rebuilt, re-manned, and expanded the Walls, although they rarely followed Qin’s routes. The Han extended the fortifications furthest to the west, the Qi built about 990 miles of new walls, while the Sui mobilized over a million men in their wall-building efforts. Conversely, the Tang (618–907), the Song (960–1279), the Yuan (1271–1368), and the Qing (1644–1911) mostly did not build frontier walls, instead opting for other solutions to the Inner Asian threat like military campaigning and diplomacy.

The Great Wall stretches from Dandong in the east, to Lop Lake in the west, along an arc that roughly delineates the southern edge of Inner Mongolia. A comprehensive archaeological survey, using advanced technologies, has concluded that the Ming walls measure 5,500 miles. This is made up of 3,889 miles sections of actual wall, 223 miles of trenches and 1,387 miles of natural defensive barriers such as hills and rivers. Another archaeological survey found that the entire wall with all of its branches measure out to be 13,171 miles.

Although a useful deterrent against raids, at several points throughout its history the Great Wall failed to stop enemies, including in the Yuan – lead by Kublai Khan – in 1271 and in 1644 when the Manchu Qing marched through the gates of Shanhai Pass and replaced the most ardent of the wall-building dynasties, the Ming, as rulers of China.

The Great Wall of China visible today largely dates from the Ming dynasty, as they rebuilt much of the wall in stone and brick, often extending its line through challenging terrain. Some sections remain in relatively good condition or have been renovated, while others have been damaged or destroyed for ideological reasons, deconstructed for their building materials, or lost due to the ravages of time. Long an object of fascination for foreigners, the wall is now a revered national symbol and a popular tourist destination.

Other purposes of the Great Wall have included border controls, allowing the imposition of duties on goods transported along the Silk Road, regulation or encouragement of trade and the control of immigration and emigration. Furthermore, the defensive characteristics of the Great Wall were enhanced by the construction of watch towers, troop barracks, garrison stations, signaling capabilities through the means of smoke or fire, and the fact that the path of the Great Wall also served as a transportation corridor.

The conflict between the Chinese and the nomads, from which the need for the Great Wall arose, stemmed from differences in geography. The wall marks the historical extent of settled agriculture, dividing the fertile fields of China to the south and the semi-arid grasslands of Inner Asia to the north. The climates and the topography of the two regions led to distinct modes of societal development.

The fertile loess soils south of the Yellow River plain made it possible for the Chinese to develop irrigated agriculture early on. Although this allowed them to expand into the lower reaches of the Yellow River valley, such extensive waterworks on an ever-increasing scale required collective labor, something that could only be managed by some form of bureaucracy.  Thus the scholar-bureaucrats came to the fore to keep track of the income and expenses of the granaries.  Walled cities grew up around the granaries for reasons of defense along with ease of administration; they kept invaders out and ensured that citizens remained within. These cities combined to become feudal states, which eventually united to become an empire. Likewise, according to this model, walls not only enveloped cities as time went by, but also lined the borders of the feudal states and eventually the whole Chinese empire to provide protection against raids from the northern steppes.

The steppe societies of Inner Asia, whose climate favored a pastoral economy, stood in stark contrast to the Chinese mode of development. As animal herds are migratory by nature, communities could not afford to be stationary and therefore evolved as nomads. As the steppe population grew, pastoral agriculture alone could not support the population, and tribal alliances needed to be maintained by material rewards. For these needs, the nomads had to turn to the settled societies to get grains, metal tools, and luxury goods, which they could not produce by themselves. If denied trade by the settled peoples, the nomads would resort to raiding or even conquest.

Before the use of bricks, the Great Wall was mainly built from rammed earth, stones, and wood. During the Ming, however, bricks were heavily used in many areas of the wall, as were materials such as tiles, lime, and stone. The size and weight of the bricks made them easier to work with than earth and stone, so construction quickened. Additionally, bricks could bear more weight and endure better than rammed earth. Stone can hold under its own weight better than brick, but is more difficult to use. Consequently, stones cut in rectangular shapes were used for the foundation, inner and outer brims, and gateways of the wall.

Battlements line the uppermost portion of the vast majority of the wall, with defensive gaps a little over 30 cm (12 in) tall, and about 23 cm (9.1 in) wide. From the parapets, guards could survey the surrounding land. Communication between the army units along the length of the Great Wall, including the ability to call reinforcements and warn garrisons of enemy movements, was of high importance. Signal towers were built upon hill tops or other high points along the wall for their visibility. Wooden gates could be used as a trap against those going through. Barracks, stables, and armories were built near the wall’s inner surface. 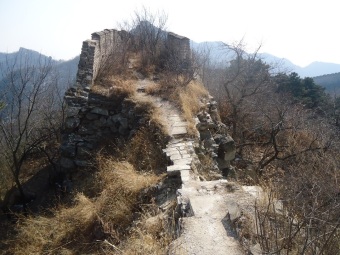 While some portions north of Beijing and near tourist centers have been preserved and even extensively renovated, in many locations the Wall is in disrepair. Those parts might serve as a village playground or a source of stones to rebuild houses and roads. Sections of the Wall are also prone to graffiti and vandalism, while inscribed bricks were pilfered and sold on the market for up to 50 renminbi. Parts have been destroyed because the Wall is in the way of construction. A 2012 report by the State Administration of Cultural Heritage states that 22% of the Ming Great Wall has disappeared, while 1,219 miles of wall have vanished.More than 37 mile of the wall in Gansu province may disappear in the next 20 years, due to erosion from sandstorms.

In places, the height of the wall has been reduced from more than 5 metres (16 feet) to less than 2 metres (6.6 ft). Various square lookout towers that characterize the most famous images of the wall have disappeared. Many western sections of the wall are constructed from mud, rather than brick and stone, and thus are more susceptible to erosion.

Modern China is a one party state – a country ruled by one authoritarian Communist Party that carefully limits dissent, protest, and alternative points of view.  In fact, the Chinese government has a tradition of keeping its watchful eye on all media. Since the rapid growth of the World Wide Web in the 1990s it has constantly invented new ways of censorship to control the world’s most democratic medium, the Internet, as well. Not everything on the Internet can be accessed from within China.  The sophisticated tools used by the government to block websites that might embarrass or weaken the party are referred to as the Great Firewall of China.

It is estimated that some 30,000 Chinese civil servants are monitoring Internet traffic and blocking content that is deemed undesirable. Typing in sensitive keywords such as “democracy”, “Dalai Lama” or “Tiananmen 1989” in a search engine results in an error message. Repeated attempts by a user to search for such a sensitive topic can result in temporary disconnection of internet service.  Websites of a sensitive nature are blocked. Internet service providers also (self) censor, as do individuals: many people do not express their real thoughts because they know these will be censored anyway.

Censorship is practiced by various interest groups at various levels: The government, who regulates the internet by means of an extensive arsenal of laws and administrative regulations. Foreign, i.e. Western, companies such as Yahoo argue that if you wish to do business in China, you must obey its rules. The Chinese commercial internet providers have to adhere to government rules. The moderators of Chinese chat rooms and discussion forums block “sensitive” postings. Everyone who wishes to go online in an Internet cafe is obliged to register beforehand with an official ID.

This ‘voluntary compliance’ with existing regulations can have major consequences. According to ‘Reporters Sans Frontières’, in 2003 dissident Jiang Lijun was sentenced to four years imprisonment for ‘undermining the state’. His conviction was based on a draft email found on his Yahoo page. This draft contained proposals for a more democratic China, which, according to the prosecution, could be regarded as taking part in “subversive activities that aim to undermine the authority of the Communist Party”. Yahoo provided the necessary data to find Jiang.

According to ‘Reporters Sans Frontières’, in September 2006, 50 cyber dissidents were held in Chinese prisons, as far as we know. Prison sentences vary from 3 to 10 years.

Chinese Internet censorship programs have censored Web sites that include (among other things):

A man stood in front of a column of tanks on June 5, 1989, the morning after the Chinese military suppressed the Tiananmen Square protests of 1989. As the lead tank maneuvered to pass by the man, he repeatedly shifted his position in order to obstruct the tank’s attempted path around him, standing up nonviolently to military repression of free speech. The incident was filmed and seen worldwide, and the “Tank Man” image below has become one of the most iconic photos of the 20th century. 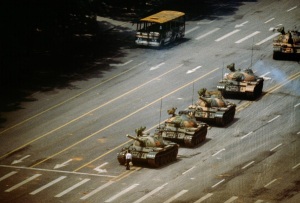 It is almost completely unrecognized within China, however.  Images of the protest on the Internet have been censored, and searching for this image can lead to your internet connection being reset.

THIS LESSON WAS MADE POSSIBLE THROUGH A GENEROUS GRANT FROM FULBRIGHT-HAYS SEMINARS ABROAD.

Scenes from China, 2015 – supplementary photos to enhance a sense of place.

Transmissions from the Emperor’s Heavenly Ford Volume One – A diary of my time teaching English in China, originally published as a zine in 2011.

Transmissions from the Emperor’s Heavenly Ford Volume Two – A diary of my time teaching English in China, originally published as a zine in 2011.