Somewhere out beyond Moscow’s Third Ring Road, a group of enthusiastic amateur archivists has undertaken a truly heroic project – to collect all of the loose odds and ends of Russia’s Twentieth Century material culture.  They have rented an old warehouse complex south of Kuzminki Park, packed it beyond capacity with everything from kitchen appliances to Soviet-era arcade games, and called it the Museum of Industrial Culture.

The men behind the project seem to be gregarious old putterers – fix-it men with eye for design and detail.  They greeted me warmly and charge nothing for entry, though they will gladly accept donations.  During my visit, they were engaged in various restoration and conservation projects – getting that old Soviet dirt bike running, feeding the guard dogs some kind of ad hoc mash, sorting some new addition to the collection.

What appears to be a mess on first glance is actually carefully organized by a logic that becomes mostly apparent to any visitor careful enough to notice.  All of the old Soviet cars, trucks, and buses are out back – along with several partial jet fuselages, one passenger, one fighter.  There is a case full of old food packaging and another with toys.  Some of the arcade games turn on, and visitors are encouraged to play.

I did not have the touch for the shooting game, much to the curator’s amusement.

Lined up in the shade outside is a row of Soviet-style vending machines – which dispense beverages into the buyer’s own personal cup.  If you’re thirsty and you didn’t bring a cup, you can use the communal one that is chained to the machine.

There’s nothing too obscure for these guys – there are various styles of the metal grating that guard windows on the Soviet apartment buildings throughout the city.  They’ve got 1980s computer equipment and old maps showing train routes throughout the USSR.  They even have those coin operated mechanical animals that sit outside supermarkets.  Whole bins of screws and fasteners.

Nothing here is sorted chronologically, and there is almost no signage.  I bet these men could tell me stories about every item in their collection, but I don’t speak Russian and they don’t seem to speak English.  All of that context would be fascinating – it is a conversation I’d love to be a part of and a book I’d die to read… But just handling these things – getting right up beside them, squinting to recognize that weird decide as a 1960s vacuum cleaner or is it a men’s electric razor?  Smelling the leaky oil from that motorcycle’s crankcase or hearing that old arcade game roar to life – these men are engaged in something bigger than a hobby…

They are archaeologists working in the recent past, collecting the things that the rest off the world has called obsolete.  What most Russians have discarded and replaced, they have rescued and preserved.

This is a barely living history, full of the granular details that no one bothers to note – because they’re so mundane, so omnipresent that no one in the future will find them interesting, right?  I mean everyone uses a typewriter for important papers, and we all consult the phone book from time to time, when we’re not too busy reading the newspaper…

Those things once seemed like they were so obvious, so unimprovable that they would just be around forever – like your smartphone or your car do today…  But one day, your great-grandkids or some future archaeologist will be confounded by the material traces of your life, too.

The Museum of Industrial Culture is a great pairing with my afternoon visit to the more conventional, state-sanctioned Moscow Museum of Archaeology.  This museum sits several stories underground, near the Kremlin, where excavations at the start of the twenty-first century uncovered the ruins of a seventh century bridge – that spanned a river that has since been confined to an underground channel and completely forgotten by modern Muscovites. 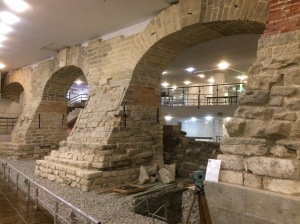 This museum has the glass cases and captions – as well as state-of-the-art VR goggles – of a more conventional institution.  A city like Moscow – that is more than 800 years old – turns up its fair share of random debris during everyday construction projects, and much that of that randomness has made its way here.  Literal pots full of gold coins hint at moments of tumult and uncertainty from centuries past – why else would somewhere bury a basket of more than 3000 coins and never come back for it?

Equally evocative are the bits of cloth – a woolen belt or a pair of socks, the scraps of a leather shoe that was uncomfortable the day it was made.  There are bits of colorful glass jewelry – tacky by modern standards, but good god, those Technicolor greens and yellows must have dazzled in a world dominated by dust, mud, and snow, like Russia had to have been 500 years ago.

These two museums have a lot in common, and leave me reflecting on my own too brief experience in this ancient city.  It is my last day in Moscow, and I have barely heard the opening lines in the epic poem that is Russia….

What do I leave behind?  It’s not a medieval comb or a rotary telephone from the Soviet-era – it is more lessons, more ideas, more points of view that I have only begun to recognize, let alone learn…

I’ll be back – with more questions in tow.