Chefchaouen is a small town of about 45,000 people. It is located in Morocco’s Rif Mountains. Chefchaouen is not wholly dissimilar to a number of other towns scattered throughout this rocky region – except that this ancient settlement looks like it was made for Instagram. Many of its buildings, many of its streets – most of its visible surfaces – are painted in vivid shades of blue.

Chefchaouen was originally founded in 1471 CE. At the time, it was known simply as Chaouen, which loosely translates as “The Peaks” in Arabic, a reference to the tall, foreboding mountainside onto which the fortified settlement was built. In these hardscrabble early days, the humble village served as a base for a fierce Berber resistance against the recent Portuguese invasion of North Africa.

In this defiant effort, the inhabitants of Chaouen were moderately successful. The remote village was never directly conquered by any European power. Chaouen would remain free and independent into the twentieth century, even as much of the rest of the nation came under foreign control. The disclaimer attached to this impressive four hundred year record is, of course, that despite the best efforts of Chaouen’s freedom fighters, no amount of Berber resistance would ever repel a European power from Morocco by force.

This humble reality was a sudden reversal of fortunes for the proud people of Morocco.

Morocco’s great dynasties, in decline by the time of Chaouen’s fifteenth century founding, offer one of the few examples in world history of a non-European power colonizing Europe instead of the inverse.

Beginning around 700 CE, successive Moroccan empires had been the dominant force in western Mediterranean world. Moroccan emperors ruled over the Iberian Peninsula, which includes modern Spain and Portugal. This long reign ensured a strong and lasting Moroccan influence in the language, art, and architecture of the Iberian Peninsula – but also a deep-seated resentment for its Islamic conquerors. The Christian peoples of Spain and Portugal fought a century-long struggle to liberate themselves from Moroccan dominance.

Their zeal also included often violent purges of any non-Christian people left behind in the wake of Morocco’s retreat.

In 1492, Chaouen received a tide of Jewish and Muslim refugees, expelled by royal decree from a newly-unified and fiercely Christian Spain.

This traumatic arrival would transform Chaouen for all time. You can force a people from their homeland, but they will always carry that homeland with them in their language, their architecture, and in their hearts.

Previously, Chaouen had been a small military enclave – homogeneous and reflective of a proud Berber heritage. Suddenly it was a cosmopolitan blend of Maghreb (the Arabic name for North Africa) and Andalusia (the Arabic name for the Iberian Peninsula). The new refugees built their homes in the Spanish style – with tiled roofs, centered around open courtyards, designed to accommodate extended families in communal spaces. The newcomers continued to speak a form of Spanish that would persist – increasingly blended with Berber and Arabic – until the modern day.

Despite this new diversity, mistrust of the outside world only intensified in Chaouen. For centuries afterward, Christians were banned upon punishment of death from entering the walled city – a lingering, telling example of how traumatic acts of prejudice can be cyclical for generations, long after the original wrong has faded from living memory…

The ancient walls of Chefchaouen predate the city’s love affair with the color blue. They served admirably to keep the kasbah free and independent from foreign power for centuries, while providing a safe haven for Jewish and Muslim refugees fleeing violence and persecution in Christian Spain.

The ancient walls of Chefchaouen predate the city’s love affair with the color blue. They served admirably to keep the kasbah free and independent from foreign power for centuries, while providing a safe haven for Jewish and Muslim refugees fleeing violence and persecution in Christian Spain.

In 1912, during the final decades of the European colonial scramble, Morocco fell decisively under the dominion of France and Spain. It was a prize divided by mutual agreement in order to keep a third rival, Germany, out of North Africa. Unfortunately, this arrangement was devised with no input from the Moroccan king or his people. After nearly five hundred years, the long, falling arc from mighty empire to dependent colony was complete.

By virtue of this European treaty, Spain would control the northern swath of the country that included Chaouen. Spanish soldiers occupied the town during much of this colonial period. They were reputedly the first Christians to enter this fiercely-independent town, and they remained, with one exception, until 1956.  During the 1920s, the Spaniards would be forced to withdraw when Berber rebels, once again based in Chaouen and its surrounding environs, launched the Rif War, a hard-fought but ultimately unsuccessful attempt to claim self-rule for their homeland.

It was after this failed rebellion, for reasons lost to history, that the town – previously a nondescript Moroccan adobe, accented with splashes of Islamic green like so many other mountain towns – adopted its distinctive, omnipresent blue palette. Some tour guides speculate that this new color scheme represented the clear, cloudless sky that hangs like a dome over this arid country. Others suggest that blue, a color with strong ties to Judaism, is symbolic of the many descendants of the 1492 refugees who still adhere to that faith. 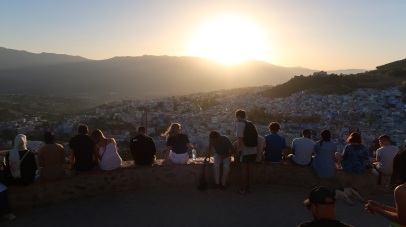 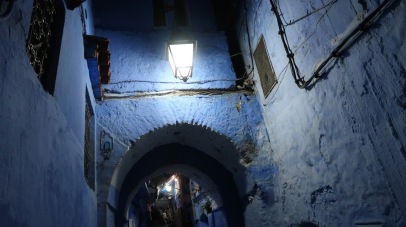 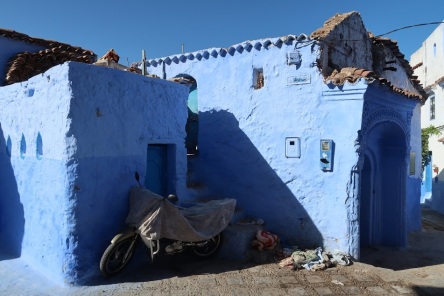 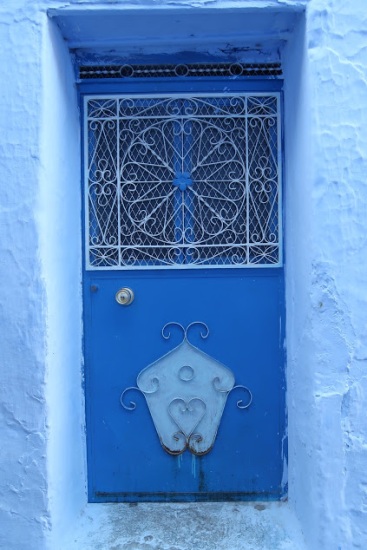 In the medina of Chefchaouen, residents have cultivated a vast, interwoven web of grape vines that grow overhead. The grapes can be eaten or turned into wine; their leaves provide fresh air and shade, and can also be eaten. 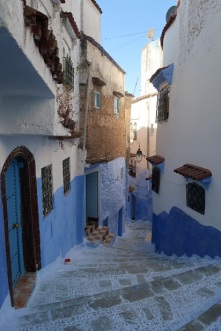 Since there are few-to-no vehicles in the medina, the streets are designed for human traffic – stairways are common in mountain towns.

Electrical wires, added long after these ancient cities were originally built, are often run directly alongside buildings, or buried beneath the streets alongside waterlines.

In Morocco, house painting is a traditionally feminine activity. So, we are left to wonder, who was the first resident of Chefchaouen to paint her house blue? And who was the first neighbor to say, “Hey, that looks pretty good – I’m going to do that, too!”

We’ll never know, but this mountaintop wave of blue was a viral trend that anticipated social media by a hundred years.

The only thing that we know for certain is that the bold blue wash is an accurate representation of the town’s independent spirit. Chefchaouen looks different from any other city in the world, and maybe that’s the point.

Chefchaouen, a town that at first glance seems to have arisen in some other, more magical, more whimsical world than our own, has become an unlikely tourist destination. In the twenty-first century, the town’s idiosyncratic color has brought the town an out-sized fame among travelers from as far away as the United States and China.

A town founded on resistance to the foreign occupation of Morocco now welcomes hundreds of thousands of foreigners every year.

These tourists, enchanted by the town’s singular beauty, sleep in Chefchaouen’s hotels, eat in its restaurants, and spend money in its shops. They are the dominant force supplying the town with a degree of wealth well beyond that of many similar-sized Moroccan communities.

Violence in Chefchaouen is a thing of the past. But it’s an open question as to whether a few hundred cans of blue paint, tastefully applied, won the centuries-long contest for Morocco’s Rif Mountains – or simply opened the latest chapter in the saga.