Today was supposed to be so simple.  Bus from Uyuni to Potosi, an easy four hour ride through the southern Bolivian Altiplano.

But, this is Bolivia, so something interesting is going to happen.  Or some things, at least.

I had a ticket for the 9:30 bus.  My ticket specifically said to arrive at the station at 9 am.  So, no big deal – it was an easy five-minute walk from my hostel.  And then I waited.  And waited.  9:30 came and went, and I asked the girl who sold me the ticket twice if I needed to be boarding a bus or something.

The station is really a street filled with buses, half a dozen of which advertise that they are leaving for Potosi around 9:30.  If you wonder how two relatively small towns can support such a plethora of competing bus lines, the answer is that they cannot.

What actually happens is that all of the companies sell a few tickets, and then they consolidate into one full bus that actually leaves at 10.

This was mildly amusing to me, since I am in no rush and I don’t have to live with this every day.  My friend Primo, a very friendly Bolivian who I met at the bus stop, is far less amused.  He speaks no English, but I can tell my Spanish is getting better.  He finds out that I am a teacher, then proceeds to tell me that the bus situation is just one symptom of Bolivia’s weak educational system – people are ignorant, he says.  And they are never prompt.  They are unmotivated.  And this all goes back to the sloppy educational system.  Now, the Japanese.  They are prompt and organized.  You say 9:30, and the bam – the bus leaves at 9:30.

Anyway, that is what Primo says.  He is actually very friendly and jolly, undaunted by his lack of English skills and my lack of Spanish.

The bus gets rolling, and we’re treated to stunning views of the Bolivian countryside.  That there in the distance, for example, is the salt flat I visited yesterday. 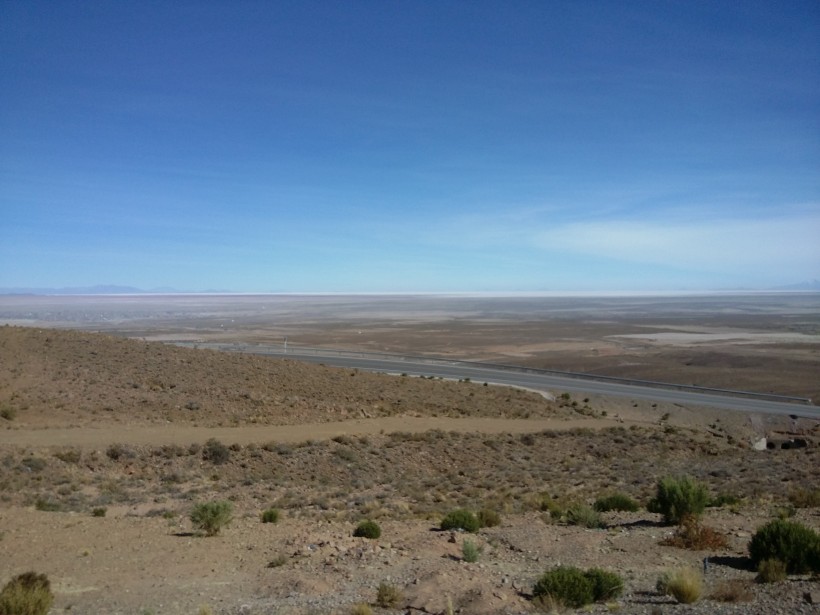 And, of course, it wouldn’t be a Bolivian bus if there weren’t people standing in the aisles because it was overbooked.  These are usually people going only the partial distance – people traveling to or from some tiny village who have paid a partial fare in cash to the conductor.

But I pretty much expected all of this.  Things get really interesting when the bus shimmies to a halt halfway up a steep switchback.  The driver gets out, clamors under the bus, and returns to announce that some important belt has broken (a rare piece of concrete information in Bolivia!) and that he is going to try to fix it.  He and the conductor set to work.  They have an impressive collection of tools and replacement belts handy, so this is probably fairly routine.

Most of the men get out to watch, while some of the kids get off to hurl rocks.  I explore the mountainside.

About an hour or so passes.

The bus is not fixed.

But one of those other bus companies from Uyuni, idle because they sent all of their passengers on this broken bus, has swept in to save the day.  A second, empty bus has arrived to take us all forward on the remaining three hours of our journey to Potosi.

The whole experience was exactly what all the guidebooks caution – about allowing extra travel time for breakdowns, and so on.

I’m thinking about all of those tourists back at Lake Titicaca, demanding authenticity from the Uros people on their floating islands.  Where are they now?   I paid about four dollars for this bus ticket, and I think the Bolivians are grossly undercharging…  All they have to do is market this as the authentic Bolvian bus experience, and they could charge ten times that.

We arrived in Potosi safe and sound, if a bit rattled from the Peruvian pop music that our second  driver was blasting out of the custom sound system he had installed in his bus.  It was so loud, there were literally babies crying.

But like so many things, it was worth it.  Potosi is gorgeous, and I’m excited to learn more about its past as the center of the global Spanish silver trade beginning in the sixteenth century.  But that is a story for tomorrow… 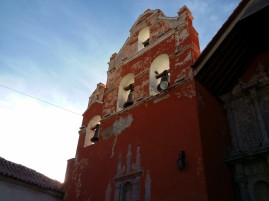