I’ve dreamed about seeing the Amazon since I was a boy.  In the early 90s, I remember there being a great deal of talk about how quickly it was disappearing, and I remember an abiding fear that it would be gone someday soon.  Let alone, that I might ever travel there myself – it seemed so inaccessible, that the best I could hope for was to read about it in books.  Travel was something that other people did.

But here I am.

And just look at that river.  Nearly a mile across, here in Peru, and by the time it reaches the Atlantic, the world’s largest river by volume is nearly six miles wide.   And this is the dry season, when the water level is approaching its lowest levels.  It’s staggering, as my guide takes me downriver from Iquitos in a small wooden board, its outboard motor chugging along like weed whacker.

You can get far deeper into the rainforest than we’re headed over the next couple of days.  It is sort of a pissing contest between rich American retirees – how many hours downriver did you have to travel to get to your lodge?

Well, I’d love to spend my whole month here, but I don’t have that kind of time or money, so I settle for lodge a meager hour or so away from the city.  So, I won’t get to see any jaguars on this trip.  But it’s still pretty impressive.

Take this kapok tree, nearly as wide as my house on diameter…

In the course of watching the river and hiking through the muddy forest, I see a tarantula, spider moneys, tamarind, fly catchers, eagles, dolphins, bull ants, an iguana, dozens of butterflies, bats, vultures, and parrots.  I go swimming for the first time in twenty years – catching catfish and piranha, which later become dinner.  In addition, I visit a rehabilitation center for illegally sold animals that have been confiscated by the police.  There, I meet a sloth, the craziest turtle I’ve ever seen, and several rambunctious monkeys use me as jungle gym.  Apparently, the anaconda rose up out of his enclosure in the middle of the night and returned himself to the wild.  Not too shabby.

Our lodge is an easy canoe paddle away from a village of the native Yagua people.  Though they have westernized in many ways – they wear t-shirts, they go to market in Iquitos – they maintain and celebrate their traditional culture through displays to tourists.  It affords them a source of income in the Amazon basin, which, despite its natural wonder, affords a subsistence existence to everyone but oil companies.  (Their footprint is large as you pass massive oil barges moving up and down the river, which buffet our tiny boat in their wake.)  The Yagua demonstrate their traditional blowgun hunting technique, as well as performing several traditional dances. 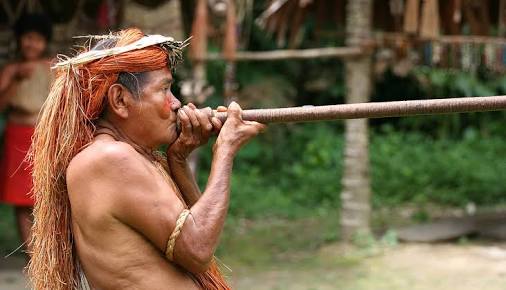 This was just the shortest, most comfortable taste of life in the Amazon.  My lodge was close enough to several villages – in addition to the Yagua – which hinted at the enormous challenges that are a day-to-day part of life in the jungle.  Most people seem to get by on fish and whatever grows in the garden plot next to their elevated home.  Water levels fluctuate with the season, as I’ve noted, but even now, in the dry season, bugs are present in the form of a constant swarm, even out on open water.

Coupled with what I learned in the museum back in Iquitos (the best part of the whole city, if you ever find yourself there!) I’m excited to incorporate this experience into the lessons I bring back to my own classroom, as well as to this website…