Construction costs, estimated to be about 585 million euro, were an issue of debate in Morocco, a lower mid-income country. While Hassan wished to build a mosque which would be second in size only to the mosque at Mecca, the government lacked funds for such a grand project. Much of the financing was by public subscription. Twelve million people donated to the cause, with a receipt and certificate given to every donor. 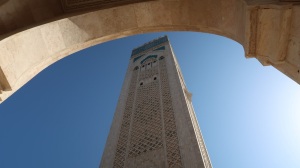